Three easy steps for getting a temperature sensor into a refrigerator. 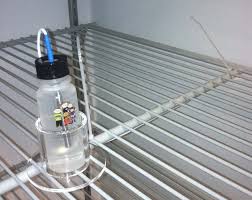 So, how do you get the sensor inside the cold cavity with the wire leading to the display or a transmitter and not have the wire create an air gap as it is threaded between the gasket and the door frame.  The challenge is to get the probe inside the refrigerator and still maintain a good seal, so the refrigerator stays cold.

If you have large walk-in refrigerators you can drill a hole through the side or top of the unit, insert the wire and then fill the hole with some sort of thermal sealant. You can do the same thing with smaller refrigerators.  There is no reason you can not drill a hole in the refrigerator wall.  The only danger is that you could puncture a coil.  But the coils should all be located on the back of the unit.  Your drill bit will go through the outer metal shell, an inch or so of insulation and the inner plastic shell.  There are no cooling coils in the walls of a normal stand up refrigerator.  But, do check first to verify that the cooling coils are on the back of the unit.

If your refrigerator does not have a port through which the sensor can be threaded:

A small gap may be left between the door and the door frame, but it should be small enough that only a tiny bit of air can escape from the fridge into the outside air and the internal temperature should not be affected.  If you are worried about the resulting gap you could drill a hole in the gasket.  Refrigerator gaskets generally have an expandable bellows below an internal magnet which ‘snap onto’ the metal door frame to provide a seal against outside air.  Drill a hole in the bellows, underneath the magnet, and thread the sensor through the hole.  Then squirt some silicon in the hole so that it fills the hole in the gasket.  You can get a tube of silicon from any hardware store.

2di increases accuracy of its temp/RH sensors
Scroll to top