Traditionally data loggers have been small single purpose devices which record data over time.  They have, in the past operated on battery power and were designed to be programmed and/or turned on with a computer, left in place for long periods of time where they operated unattended, collecting and storing data electronically.  A distinction can be made between a data logger and data acquisition equipment which is generally tethered to a computer which operated as a controller and a storage device for one or more sensors.  Now with changes in technology many hybrid devices have entered the market so the user is able to pick and choose between features.  The TV2 combines the features of data loggers and data acquisition equipment introducing a flexibility which has hitherto been unknown.

The TV2, in addition to having the functionality of data loggers and data acquisition equipment also acts as a temperature alarm and monitor for multiple collection points.  It can operate as a stand-alone data logger or as a front-end data collector for a computer or network.  Its four sensors makes it a sort of data collector storing all the logged data in its own memory.  But it can also automatically pass the collected data on to a PC, creating data files on a hard drive somewhere in the network.

Since the TV2 has an Easy-touch display the user can interface with it directly, setting alarm points, viewing the logged data as full-color charts, changing settings, etc... all without the need of a computer front-end.  Its backup battery continues to operate the TV2 even during power outages.

Wired:  Up to four sensors can be positioned up to 100 feet from the display.

Wireless:  Four wireless sensors can be used, with a range of over 60 feet, clear line-of-sight, so you have a lot of flexibility in the placement.  The sensors transmit the temperature data to the base station every few seconds where it is stored in non-volatile memory and displayed on the Easy-Touch™display. 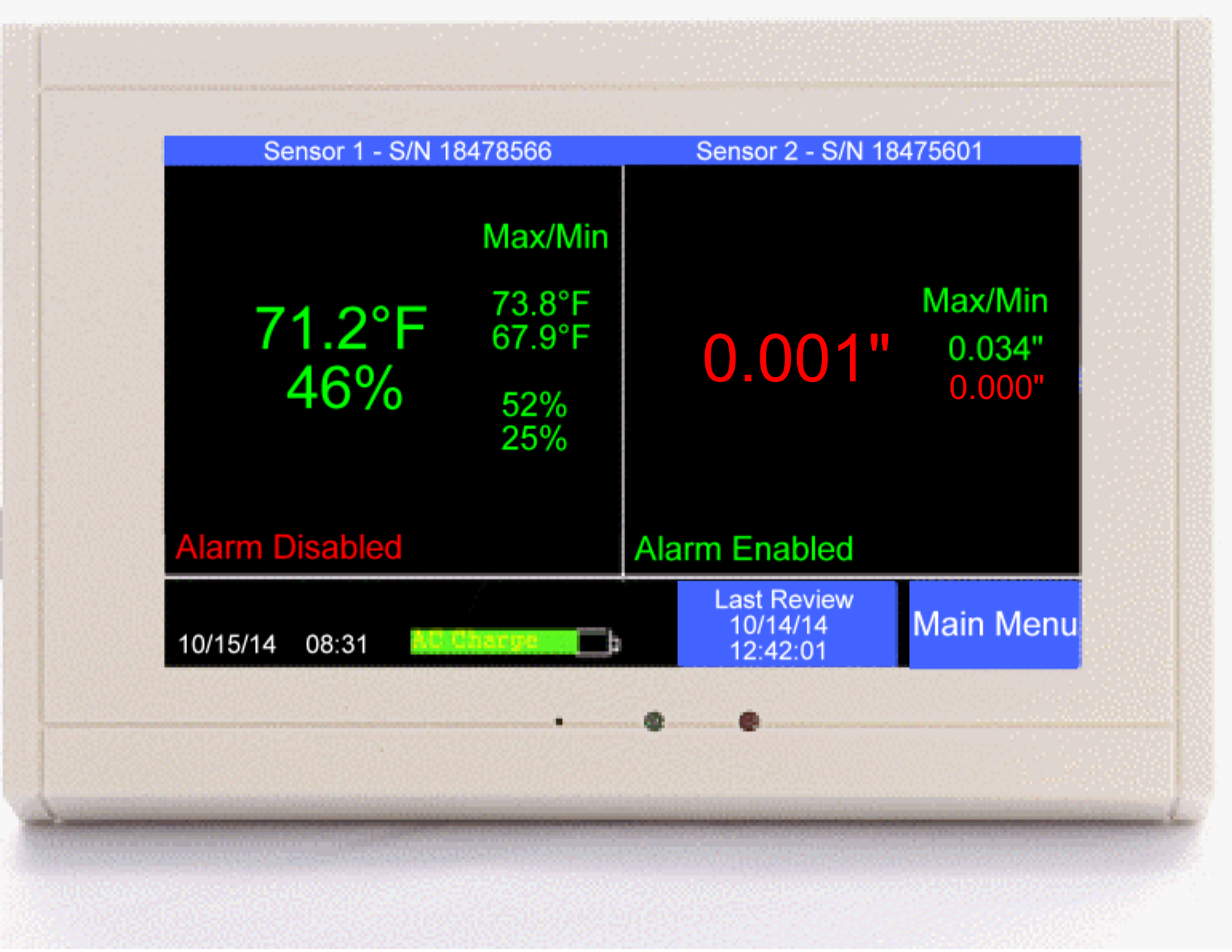 The Next Generation Data Logger

Historically data loggers were small independent devices which had to be preprogrammed and then positioned in the area where the user wanted to track temperature.  This worked great for remote areas where electricity was not available and there was no need to view the data until some time in the future.  But if you wanted to see the data you had collected immediately or actual receive an alarm if the temperature became unsafe you were out of luck.

The TV2 uses state of the art technology to not only log data but also alarm and chart the data.  The TV2 has its own Easy-Touch™display so that you can view the data at any time without having to download it into a computer.  The TV2 also has multiple sensors.  It can be used completely stand alone or it can be attached to a network so that the data can be viewed by any computer device on the network.

The TV2 keeps lots and lots of logged data

A continuous chart is always visible on the large LCD display. The data can be scrolled through

to see individual data points on the display.  You can also zoom the display out to see all of the stored samples on the screen at one time, making it very easy to spot trends. (specs)

If you log data every 10 minutes over 2 years of data will be stored in the TV2 monitor.

In addition to seeing the chart for each sensor on the display you can use a trace mode to scroll through each all of the temperature history.  By moving back and forth through the data displayed on the chart you can see exactly when each individual reading was taken.  This makes it easy to pinpoint a temperature high point and see when it occurred, how long it lasted and whether it was a spike or a slow ramp up in temperature.

Triggers an alarm and/or dialer

The TV2 monitor has an on-board alarm which sounds any time your trigger points are reached.  Each high and low alarm point has a user settable alarm delay time to avoid false alarms.   In addition to the local alarm a relay closes.  This relay can be used to trigger an auto dialer or external local alarm. The optional multiple number auto dialer and local alarm are available for the TV2.  A text or email message can also be sent when an alarm occurs.

Designed and Manufactured in the USA